Heard of Delta-8 THC? The cannabinoid has been getting quite a bit of press lately, with some calling it a superior form of THC. As hype builds, it’s started to appear in stores and online retailers and has quickly taken off. Sales have increased exponentially over the last few years, even during the pandemic.

If you’ve come across delta-8 or heard chatter about it on the Internet and you’re unsure what it is, you’re not alone. With the huge range of cannabis products available, it can be challenging to parse the quality products from the snake oil. That’s especially when you’re dealing with a compound like delta-8 that is so newly available, and of questionable legality.

In this blog, we’re breaking down how delta-8 THC fits into the world of cannabis and CBD — how it works, if it’s legal, and if you should use it.

What is Delta 8 THC?

Speaking simply, it’s a cannabis compound (or cannabinoid), a category that includes CBD, CBG, and THC, among others. The National Cancer Institute calls it “an analogue of tetrahydrocannabinol (THC),” meaning that in most respects, THC and delta-8 THC are pretty similar. THC is actually shorthand for delta-9 THC.

Delta-8 appears in cannabis naturally, but only in very small quantities. Most of the delta-8 products you see on store shelves and online are made in a lab, first by extracting CBD isolate from cannabis, and then synthesizing that compound into delta-8 THC.

How Delta-8 is Consumed

Delta-8 THC is commonly available as tinctures, gummies, or vape cartridges, much like CBD and THC. Because it occurs naturally in such low quantities, it’s very challenging to cultivate cannabis with high amounts of delta-8. Most of the flower products you see on the market are made by adding a delta-8 distillate to CBD flower, though a few products claim to be grown from strains with naturally-occurring high levels of delta-8 (we wouldn’t necessarily trust those at the moment). Right now, delta-8 is cheaper than THC, aiding in its burgeoning popularity. 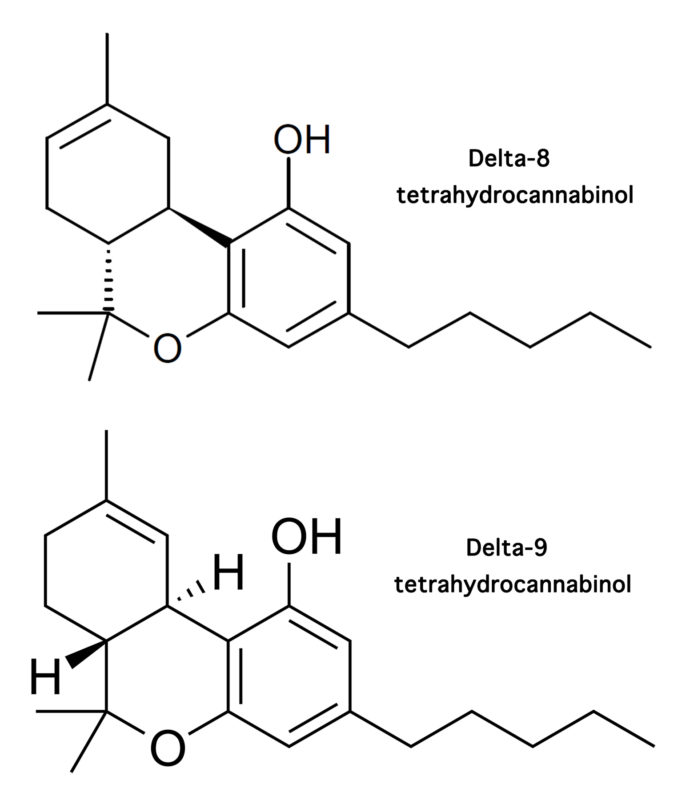 Delta-9 is the THC we all know. It’s the component of cannabis that gets you high. (Just as a reminder, THC concentration in CBD products is equal to or less than 0.3%. That’s very, very small amount.)

Chemically, delta-8 and delta-9 are almost identical. They have the same formula, and both have carbon-carbon double bonds in their molecular chain. The difference is delta-8 bonds on the 8th carbon chain, while delta-9 bonds on the 9th — hence the name.

This subtle difference in structure has significant implications. For one, delta-8 is more stable, meaning it has a longer shelf life. The other big difference is that, when consumed, delta-8 produces a different, more mild effect. As the National Cancer Institute puts it, “This agent exhibits a lower psychotropic potency than delta-9-tetrahydrocannabinol (delta-9-THC).”

Here’s What Delta-8 Does

Think of delta-8 as a slightly less potent version of delta-9. Both cannabinoids bind to the CB1 receptor, but because of their different structures, the effect is a little bit different.

It will get you high, producing feelings of euphoria and relief, although this is different from the typical marijuana high. Consumers have reported the effect is smoother and milder, and for many, more clear-headed than THC. Some people who get feelings of anxiety or paranoia from THC have a more pleasant experience with delta-8. This varies, though, from person to person. Others say it doesn’t get them high at all in the standard sense of the word.

Is Delta-8 Right For You?

That’s a matter of personal preference. If you find the high from THC too intense and are prone to feelings of anxiety, it could be a good fit. There’s no harm in trying; as a chemical compound, delta-8 is safe.

But don’t think of delta-8 as a replacement for CBD. It does not have the same proven benefits. We’ll get into why that’s the case in more detail down below.

That’s the big question at the moment. Unfortunately, it’s complicated. Right now, delta-8 exists in a kind of a legal gray area, with two documents from different administrative bodies within the federal government seeming to contradict each other.

The first is the 2018 Farm Bill, which legalized all hemp-derived cannabinoids, including CBD. Most people believe that law, as written, includes delta-8. As a result, companies have begun to make various products featuring the compound, even in places where THC is illegal.

The problem is that the Farm Bill was intended to only legalize cannabinoids that do not have psychotropic effects. That’s where the second document comes in, from the Drug Enforcement Administration (DEA). In August of 2020, the DEA released an Interim Final Rule, which explained how it would be implementing the Farm Bill. There was hostility to hemp and marijuana present in the interim final rule. In terms of delta-8, the key part of that document states: “All synthetically derived tetrahydrocannabinols remain schedule I controlled substances.”

It seems that it would make delta-8 illegal, though it isn’t mentioned by name in the interim final rule. As mentioned, its low concentration in cannabis means that most delta-8 is derived from a chemical conversion of CBD and would fit under their IFR.

The IFR is currently under review. Hopefully, the DEA clears up the confusion soon, although it appears that those on the pro-delta-8 side may be disappointed. A federally legal version of weed that gets you high is, for many, probably too good to be true.

Some states have moved ahead with laws themselves. Right now in Alabama, the state senate is considering an amendment that would add Delta-8 to their controlled substances list. That would make it the 12th state to ban it. It is currently illegal in: Utah, Rhode Island, Montana, Mississippi, Iowa, Idaho, Delaware, Colorado, Arkansas, Arizona, and Alaska. Be aware that just because THC is legal in your state, does not mean that delta-8 is. So be careful out there, and keep in mind that federal law could change at a moment’s notice.

If Your State Hasn’t Passed Laws Against Delta-8, You Can Try it Right Now

Currently, if you want to try Delta-8, you can order it online or find it in some brick-and-mortar stores (assuming you don’t live in one of the eleven states listed above). There’s no mechanism in place to prevent you from doing so, even if some people believe the law as written does classify it as illegal on the federal level. We just wouldn’t recommend opening a delta-8 shop right now, because there’s a decent chance enforcement could soon change.

Delta-8 products will cause a person to fail a drug test, if that test is looking for THC.

Also, keep in mind that because it’s such a new product, and one that’s in a strange place legally, businesses might not have the same strict procedures for extraction and production the way many do for CBD. Green Lotus, for example, publishes all of its lab results online.

Is There Delta-8 in CBD?

If you’ve been using CBD and don’t like the sound of delta-8 THC, good news. Whether you’re buying CBD isolate or full-spectrum hemp oil, delta-8 appears only in very small concentrations — certainly not enough to get you high. So if you’re not sold on this trendy cannabinoid, don’t let that stop you from shopping at Green Lotus Hemp.

Delta-8 is Not a Replacement for CBD

First of all, they have different effects. CBD will not get you high. The effects of delta-8 are much closer to THC.

Delta-8 also does not have proven benefits in the same way that CBD does. CBD is a tried-and-true method for managing issues like pain and anxiety. Studies have shown the benefits of CBD on your sleep cycle, and on reducing stress. CBD accomplishes all of this without an intoxicating component.

As for delta-8, people are reporting similar benefits, so it’s likely that peer-reviewed studies will soon be completed, but proponents will be watching the DEA’ for a decision.

In any case, we’ll be following closely.