You might’ve heard of the latest battle between compounds — CBG vs CBD.

Some people have even said, “CBG is the new CBD,” in the same way that “40 is the new 30.” That’s not the case. Think of CBG as complementary to CBD rather than a replacement for CBD.

CBG is a beneficial compound and a big reason that full-spectrum hemp oil — which includes CBG, CBD, and other cannabinoids — has many advantages over CBD isolate.

The entourage effect is still the most promising aspect of cannabinoid supplementation, so let’s look at CBG and how this previously overlooked and powerful cannabinoid works with CBD to keep us healthy and happy.

Cannabigerol (CBG) is a naturally-occurring compound found in the cannabis plant. More specifically, it’s a cannabinoid, one of more than 120 in cannabis. Other cannabinoids include Cannabichromene (CBC), Cannabidiol (CBD), and Tetrahydrocannabinol (THC).

Of the cannabinoids, most people look at CBG vs CBD.

It makes sense to compare the two because of their similarities:

In fact, CBG and CBD may have the ability to decrease the psychoactivity of THC. That means CBG can increase mental clarity naturally, taken alone or with THC.

The Special Benefits of CBG

CBG provides several benefits when consumed regularly, some of which overlap with CBD.

Peer-reviewed studies point to CBG as a potent anti-inflammatory with potential to address anxiety and stress. CBG has been observed to promote healthy skin and stimulate appetite in initial studies.

We’re looking forward to the research and clinical trials that will come out on CBG in 2021.

CBG vs CBD: The Differences

CBG is found in the cannabis plant in much smaller quantities than CBD. Industrial hemp carries around 1-3% CBG compared to anywhere from 5-25% CBD. Here at Green Lotus, we’ve been investigating high-CBG hemp cultivars for the last two years. Interest is accelerating the creation of new strains.

CBG works by binding to both primary cannabinoid receptors CB1 and CB2.  It binds strongly to these ECS receptors, meaning that its effects are tied to the ECS in a more direct way than CBD.

You Don’t Have to Pit CBG vs CBD. You Can Have Both

Some people are calling CBG a “wonder drug.” While we’re excited about the new research, we think that’s a little bit premature and somewhat overstated. That’s not because CBG isn’t promising.

Rather, CBG is more effective when it’s consumed as part of full-spectrum hemp oil, which uses whole-plant extraction to allow for a wide variety of cannabinoids, terpenoids, and antioxidants. That means a combination of CBG and CBD (among others) without the psychoactive properties of THC.

Green Lotus hemp oil is always full-spectrum, so you’re getting all the benefits of CBG and CBD, and then some.

CBG and CBD Work Together Through the Entourage Effect

CBG and CBD work together synergistically in a mechanism called the entourage effect.

That means when you take full-spectrum hemp oil, you don’t just get the benefits associated with these two compounds individually, you get the benefits of the two working in concert — like in this one study that examined how CBG and CBD can work together to help manage neuroinflammation. 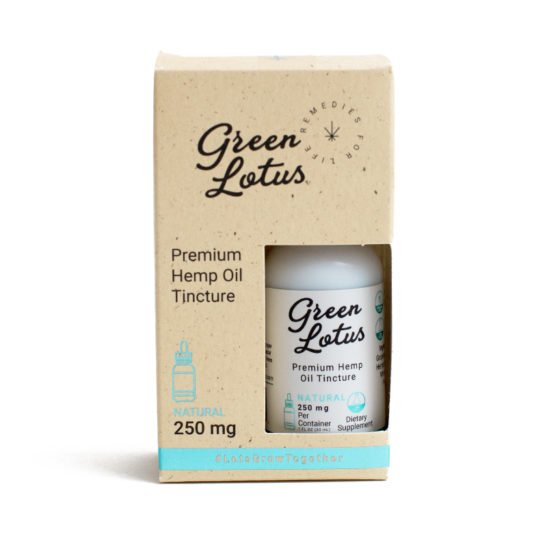 Existing full spectrum products like our Natural 500 mg Tincture take advantage of the entourage effect for a steady serving of CBG, CBD, and other cannabinoids and terpenoids. Right now, nature is the best remedy.