On March 15th, John Hellerstedt, Commissioner of the Texas Department of Health and Human Services, signed an amendment to remove hemp from the list of controlled substances. The amendment was signed and sent to the Texas Register for publishing. It will become effective on April 5th (due to a 21 day processing period).

That’s right. Hemp is off the list of controlled substances. Effective April 5th, the “legal gray area” around hemp-derived products will become significantly less gray. It’s state law: possessing any product or extract derived from Farm Bill compliant hemp will not constitute a prosecutable offense in the state of Texas.

Rogue municipalities and overzealous county prosecutors can forget about pursuing their  reactionary, draconian policies against hemp growers, manufacturers and consumers. The refrain that, “We’re just applying the law as it’s written” won’t fly after April 5th. The law is clear. We won. They lost.

So let’s set things out very clearly: Decisions have been made. The comment period is over, and the amendment is published in the Texas Register. The deed is done! View the complete letter here. 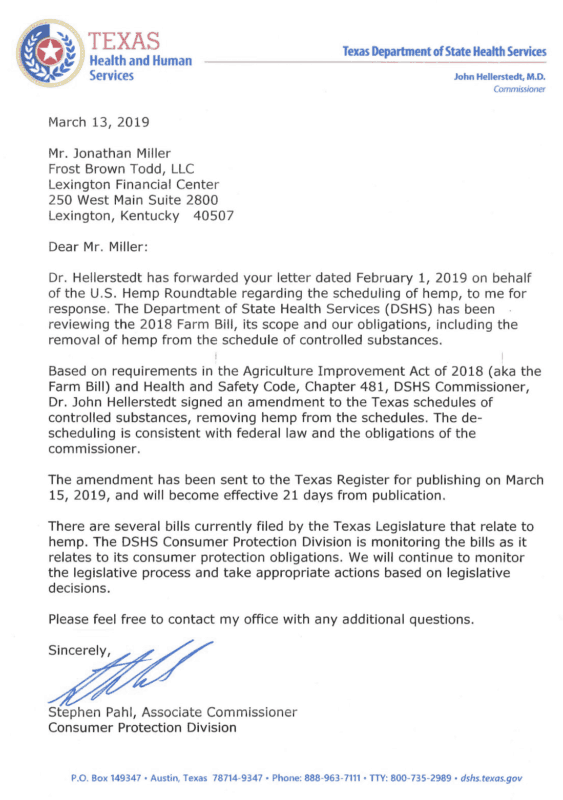 What do they mean by “hemp?” Just the plant? What about CBD oil or full spectrum hemp oil?

It’s not just the plant. It’s everything.

“the Cannabis sativa L. and any part of that plant, including the seeds thereof and all derivatives, extracts, cannabinoids, isomers, acids…with a delta-9 tetrahydrocannabinol concentration of not more than 0.3 percent on a dry weight basis.” Id. Sec. 10113 § 279(a)(1)

Notice “extracts” and “cannabinoids.” This explicitly provides for oil extracts and all associated cannabinoids — all the good stuff. Yep, this is big! (Though we expect the FDA to continue to classify CBD isolate as a drug, and therefore within the purview of FDA regulation, hemp oil is essentially liberated. Green Lotus uses full spectrum hemp oil, not CBD isolate.)

Check back to this blog for updates, and be sure to stick around to read about Senate Bill 1240, a bill that would establish a regulatory framework for the growing and cultivation of industrial hemp in Texas. We’ve descheduled hemp; now we need to grow it!

SB 1240, A Bipartisan Plan for the Future of Texas Hemp Production

Green Lotus Hemp is proud to support House Bill 1240, a clear-cut, efficient and sensible proposal that will unleash the productive potential of Texas farmers and benefit millions of Texans searching for low-cost therapeutic alternatives to prescription drugs.

Introduced on February 27th, the bipartisan SB 1240 is currently sponsored by five Republicans and two Democrats. The Bill follows blueprints set out by the 2018 Farm Bill, which allow for states to assume “primary regulatory authority”over their hemp production and devise procedures for testing, legal descriptions of land, plant disposal and inspections. Id. § 1 (amending Tex. Agriculture Code § 121.003 (2005)) 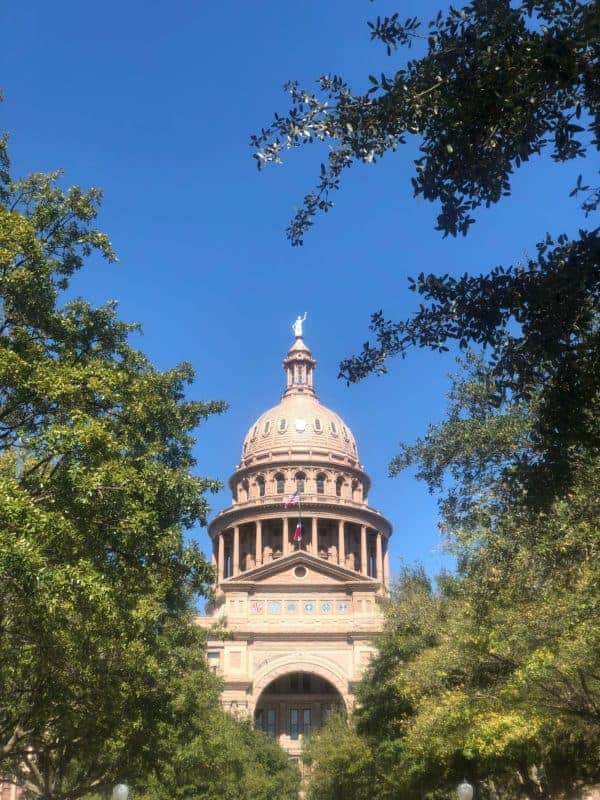 Should SB 1240 pass, effective of September 1st, 2019, the Texas Department of Agriculture would begin putting together a proposal, or state plan, to submit to the United States Dept. of Agriculture for approval.

How to Become a Hemp Farmer Under SB 1240 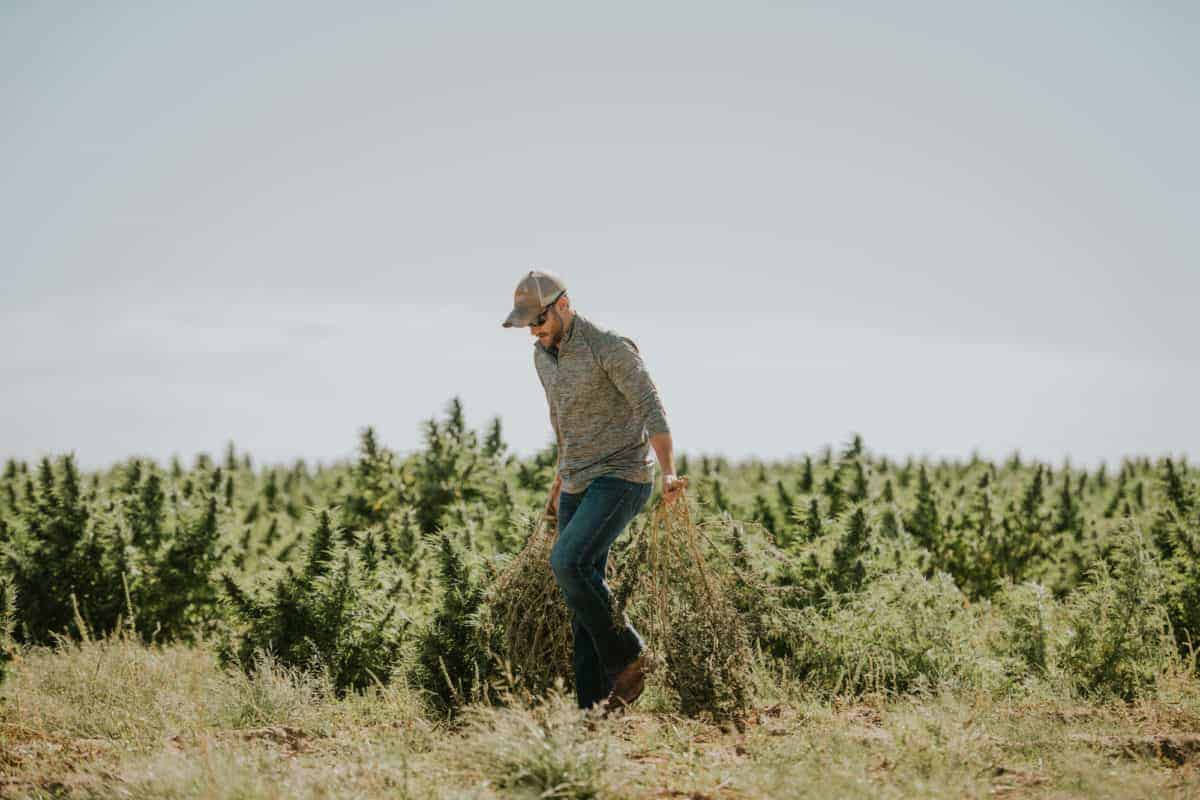 If passed, SB 1240 would amend the legal grey areas that have led to uncertainty throughout the state:

Open To All Texans

Because access to manufacturing and compounding facilities will be a challenge for hemp industry newcomers, Green Lotus Hemp believes that governmental, regulatory and administrative costs related to hemp production should be as low as possible. As for GLH, we already have a well-functioning, farm to bottle supply chain. We want to make sure that other startups have the financial leeway to establish their own best practices. That’s why GLH is excited to see SB 1240’s commitment to minimizing barriers to entry, especially financial ones. A $100 application fee and a $100 fee/per location keep starting costs modest. Annual testing fees are $300 per “plot.” “Plots” include greenhouses and “indoor growing structure[s],” additions that could encourage small-scale cultivation in urban areas. Id. § 1 (amending Tex. Health & Safety § 122.001(5)) 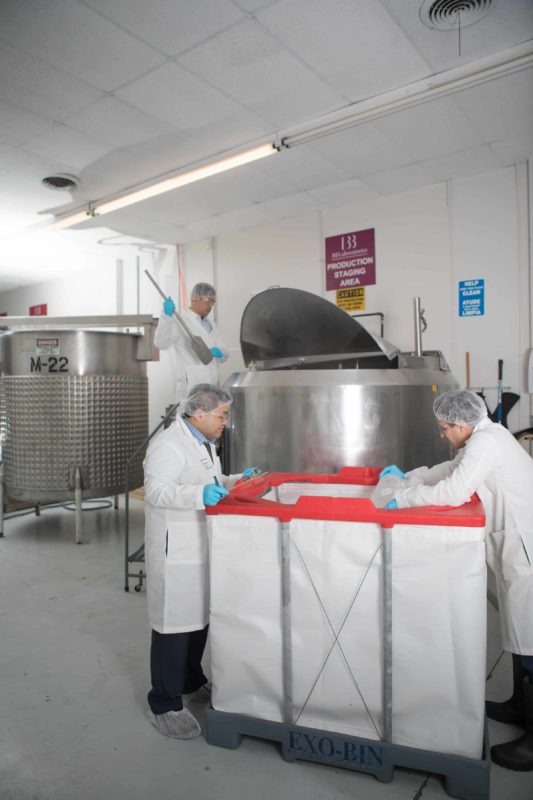 It’s Not a Free For All

Just as the 2018 Farm Bill stopped states from interfering in the interstate commerce of hemp, SB 1240 would similarly block the ambitions of municipalities and counties to enact or enforce additional regulations on hemp farmers. Localities stuck in outdated ways of thinking about hemp would not be able to interfere in the legitimate practices of state-licensed hemp farmers.

On the other hand, authorities would have ample power to insure against the possibility of hemp farmers becoming marijuana farmers. The power to conduct random inspections, on top of annual testing, would act as a strong deterrent to the cultivation of illegal drugs.

Growers would have the option of testing for THC concentration three different ways, through

The Texas Dept. of Agriculture would ultimately retain the discretion to review test results from universities and private labs. This is sensible. Hemp cultivation thrives on cooperation between private business, government and universities. SB 1240 recognizes the importance of this synergistic relationship to the future of ethical hemp production in Texas.

Green Lotus Hemp fully and unreservedly supports SB 1240. We stand behind this bipartisan effort to create new jobs, empower farmers and ensure that all Texans have the opportunity to explore the therapeutic power of hemp. To the Texas legislature, our partners and our customers, we say, “Let’s grow together!”

7 thoughts on “Hemp Descheduled in Texas! Paves the way for Senate Bill 1240”